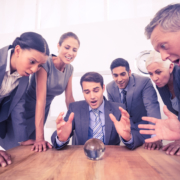 Recalls are a big deal right now, and it seems no industry is safe from defective products. Hundreds of products are recalled every year in every category from food, kitchen appliances, cars, Christmas trees, and everything in between. Perhaps the most alarming recall of 2020 was ACME’s crystal ball.

ACME’s crystal ball is used by weathermen, stock brokers, soothsayers, and of course, home inspectors. The crystal ball is advertised as empowering regular people with clairvoyance to reliably predict the future. Home inspectors generally add the fortune telling orb to their tool box, right next to their x-ray glasses. Our investigative journalists interviewed hundreds of homeowners who reported being victim to these faulty forecasts.

Bob S. from Bismarck was heartbroken saying he “relied on the home inspectors crystal ball to let him know his HVAC system would quit 8 months after the home inspection.”

John A., a first time home buyer from Devils Lake told us that he chose his inspector based on his experience with crystal balls, but was completely let down when he noticed his windows started fogging the first summer after moving into his home.

Janet W. admitted being unfamiliar with home inspections, but was reasonably sure her home inspector should have been able to predict that her microwave was going to fail within the first year. She’s looking into whether or not her inspector even had his crystal ball calibrated before the inspection.

We reached out to a local Minot home inspector about the recall, but he was hysterical and would not comment. Before realizing his crystal ball was faulty, he used it to gamble away his life savings on a Vikings game. “In retrospect, I should have known the Vikings could not win” he lamented.

We have not been able to reach ACME for questions. The CPSC says “immediately stop using the product” and warns home buyers that they should assume that their home inspection report is only accurate for the day it was performed.

Selling Your House? Read This First!